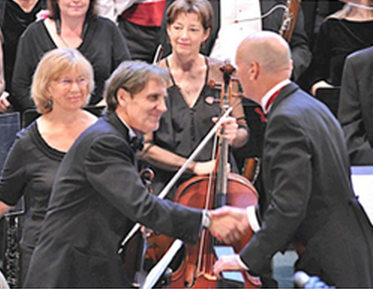 Richard performs currently as Concertmaster of Auburn Symphony and InConcert Sierra. He has been featured locally as a chamber musician and as soloist for Music in the Mountains, InConcert Sierra, and the Apollo Arts Ensemble.

Richard has performed live on the Academy Awards (including 2014) and The Tonight Show and has collaborated with Frank Sinatra, YoYo Ma, Barbra Streisand, Mannheim Steamroller and Puff Daddy among many others.

Principal 2nd Violin for Danny Elfman (also has on occasion performed as such for Randy Newman and John Williams, among others…)

Richard and musician/singer wife Dawn are the proud parents of a very musical young son Bren, and reside in Nevada County, California.