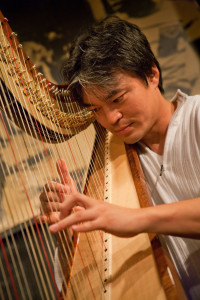 Motoshi began his musical journey at a young ago on the piano and later jazz guitar.  In his 20’s he launched into the Tokyo night scene with a splash on acoustic & electric guitar.  He quickly was recognized as “One of the most remarkable young Jazz musicians” by Swing Journal Magazine.

In 1997, Motoshi moved to the USA & became intrigued by the harp. Motoshi completely immersed himself in the self study of the instrument, immerging in 2005-10 as principle harpist of Stockton Symphony Orchestra and featured soloist in 2009 & 2010 season.

Although playing in the symphony, the powerful allure of Jazz seduced Motoshi and his newfound companion, the harp, back to the world of improvisation.  From his deep background in jazz Motoshi is challenging the traditional use of the instrument and is daring the harp world with his modern jazz compositions and innovative playing style.

His groundbreaking style was noted in Harp Column “(his) introspective soloing is reminiscent of Keith Jarrett.”

He tours and gives workshops in Japan and is considered the most influential Jazz harpist there.

Meeting Akio in early 2014 has lead to 2 tours to Japan, an new CD and a unique 53 string connection.

Motoshi brings his unique harp accompaniment to Suzuki Book 1 for Strings Along.  Excite your early violin students with accompaniment from the heavens.

Surprisingly, Motoshi has a background steeped in the medical field.  He holds a B.S. of Health Science and Nursing and is an RN from Tokyo University.  He’s recently published his research article “Total Health and Music,” in the Japanese "Science and Public Health Journal," integrating two of his life long interests.