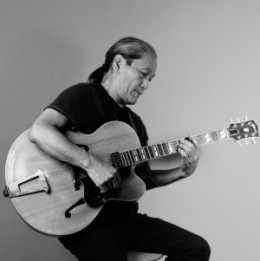 After growing up in "the wild west" of Japan's snowy northern island of Hokkaido, Akio moved to the   big city, Sapporo, where he found his life passion, the guitar.

Buying an album for the “cool cover”, he met the jazz world through The Further Adventures of Jimmy Smith & Wes Montgomery.  He replayed this album 1000’s of times while learning every note, nuance & rhythmic pattern, actually birthing what has become his unique teaching style Gig-Along.

Moving to the USA in 1977, Akio grew up musically while playing the Jazz & Brazilian circuit in Chicago.  These 12 years were full of formative experiences playing with many of the seasoned veterans of modern jazz of the 40, 50 & 60s, like John Young, Eddie DeHaas, Marshal Thompson along with younger generation Ron Dewar, Kelly Sill, Joel Spencer, Judy Roberts & Paulinho Garcia.

The Chicago musical community of the day was not only a training ground for ‘groove’ but was welcoming, warm & a tight knit supportive musician culture that embraced the new arrival and .

The Akio Sasajima group played the first Chicago Jazz Festival and 3 later years and taught at De Paul University for several years.  To date he has recorded with Ron Carter, Joe Henderson, Paquito D’Rivera, amongst others.

Though entirely self-taught, his compositions are well received among top musicians.  Joe Henderson, one of the most well known jazz composers in modern jazz history, kept several of Akio’s tunes in his performing repertoire.

Motoshi & Akio formed a Jazz guitar/harp duet, possibly the only one in the world!  They have toured Japan twice, played Suntory Hall and recorded a CD Night Time Jazz all in 2014.

Akio’s teachings have become the nucleus of the last several years while he has fully developed a method with which to pass on the elusive art of improvisation to the next generation of jazz players.

Playing his unique guitar accompaniment with the Suzuki Violin Book 1 songs adds another dimension for beginning violin students.  Akio has the rare ability to take students on a musical journey and safely meet them on the other side of creativity.

“Guitarist Akio Sasajima may be one

of the best kept secrets in jazz.  His lyrical

…while their delightful duets on “Crazeology”

deserve comparison to the landmark duets of